Recently I was doing a little research on Dinosaurs, so naturally at one point I did what we all do: I typed in “dinosaur” into a Google search. One thing that peaked my interest is that by the time I typed “d-i-n-o-s…”, Google was already suggesting a term as it’s number one suggestion: Dinosaur Train. Dinosaur Train is a children’s cartoon depicting, but of course, the supposed ‘world of dinosaurs.’ It offers a steady diet of indoctrination into the supposed Triassic, Jurassic and Cretaceous “eras.” The evolutionary sequences and timelines are simply presumed. If you climb aboard this “Dinosaur Train,” you’ll visit different dinosaur periods, what life was like for them, what environments they thrived in, and etc. But if you deboard from this Dinosaur Train, and actually take a look at the one and only source that could provide evidence for these evolutionary tales – the burial sites that contain dinosaur bones – we observe a radically different narrative. These burial sites speak loud and clear of a Dinosaur Train Wreck! (keep reading below…) 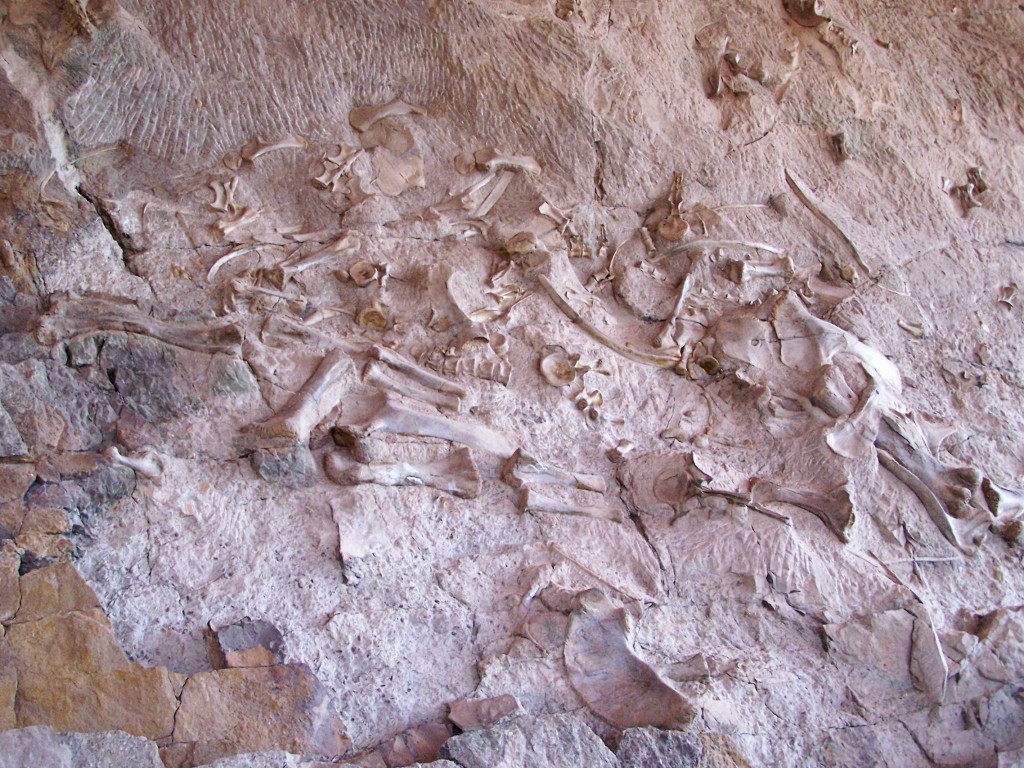 One of the biggest dinosaur fossil graveyards in the world is in Utah, USA, at the Dinosaur National Monument (DNM). There’s a great article on this site by Steve Austin and William Hoesch at ICR, which I will largely be relying on in what follows.1 Though we find many whole skeletons at DNM, the biggest find is of radically ‘disarticulated’ dinosaur bones. That means these dinosaurs were literally pulled apart from limb to limb. Dinosaur bones and skeletons are packed one on top of the other as if they were sardines in a sardines tin (you can see this in a couple of the images below). They were rapidly transported and then buried in massive mud and sand flows which happen to form part of the “Morrison Formation.” This formation stretches from New Mexico to Canada and covers significant portions of ten US states. This formation is “the most fertile source of dinosaur fossils in North America” according to Wikipedia, so it can’t be claimed that I am simply picking an extreme and unrepresentative site. These dinosaurs were clearly entombed in a massive, obviously fast flowing and catastrophic flood event. It cannot be emphasized enough that they are entombed directly within this geologic formation, which clearly shows that this entire formation was formed rapidly – like in days, not eons. 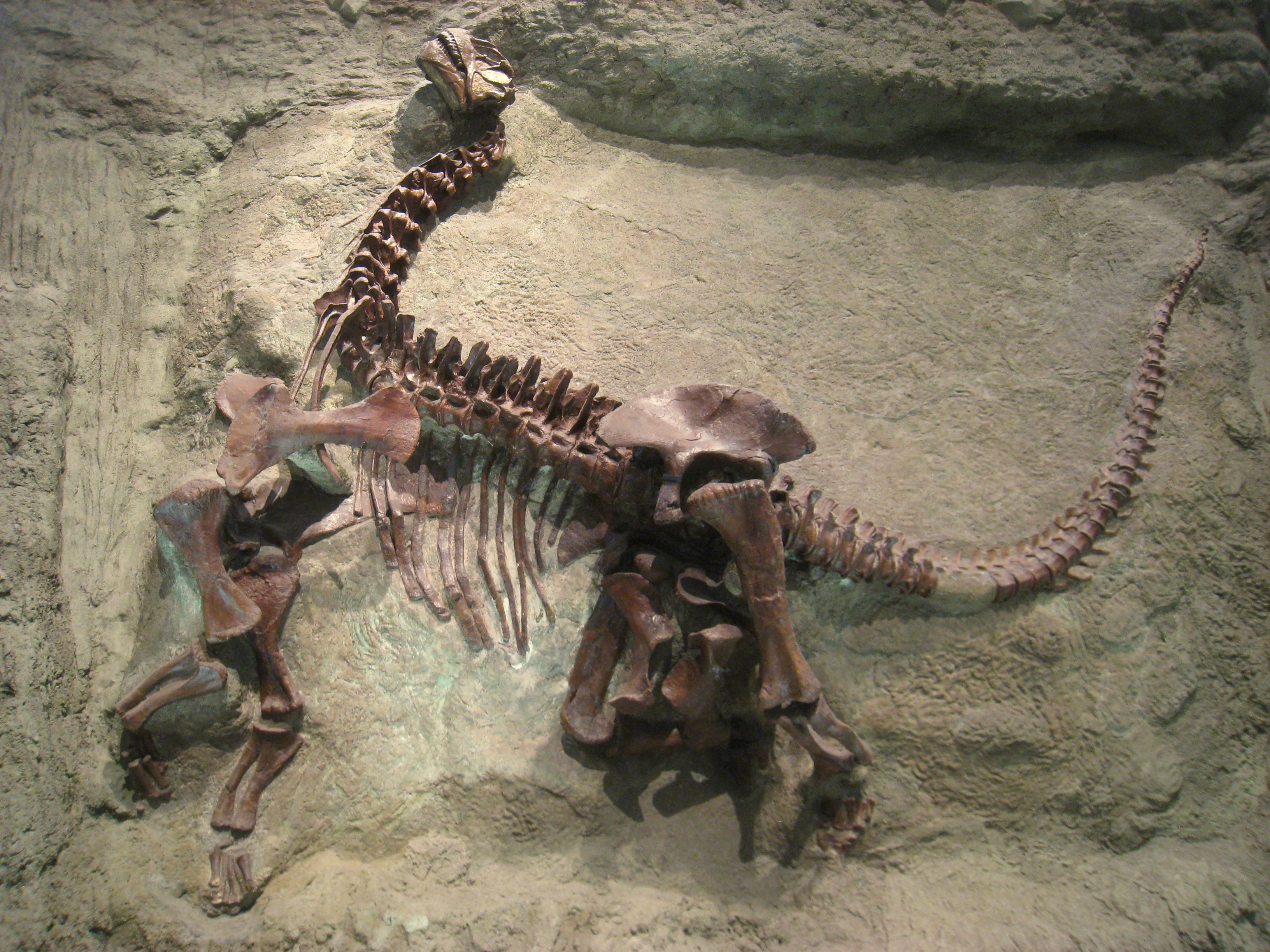 How did this baby Sauropod (‘Camarasaurus’) get buried while (apparently) standing up? What was the source of all that sand, mud, and other material, which by the way, was filled with marine creatures (!). Look at his face. Look at his tail which looks like it was tensing upwards. We see here the horror this poor guy was experiencing as he stretched his neck as high as he could, and as every fiber in his body stretched upwards, in order to escape — though the effort was futile — from the tsunami of sand and water that was crashing over him. Only a massive flood, coming in this case like a tsunami, could account for this. It is critically important to understand that the material that makes up the Morrison formation must therefore have been laid done catastrophically and in a brief moment in time (within hours or at most days!). Do you think this big guy would have let himself be buried with a slow moving, year by year accumulation of material? Of course we know that’s impossible, which shows that the Morrison formation was formed almost instantly. Of course, I use this dinosaur as only one example to illustrate this point. If this was the only dinosaur or creature that looked like this, we might consider it an anomaly, but of course, everything at DNM and finds all across this region testify to the same kind of fast moving, violent catastrophic flood event. 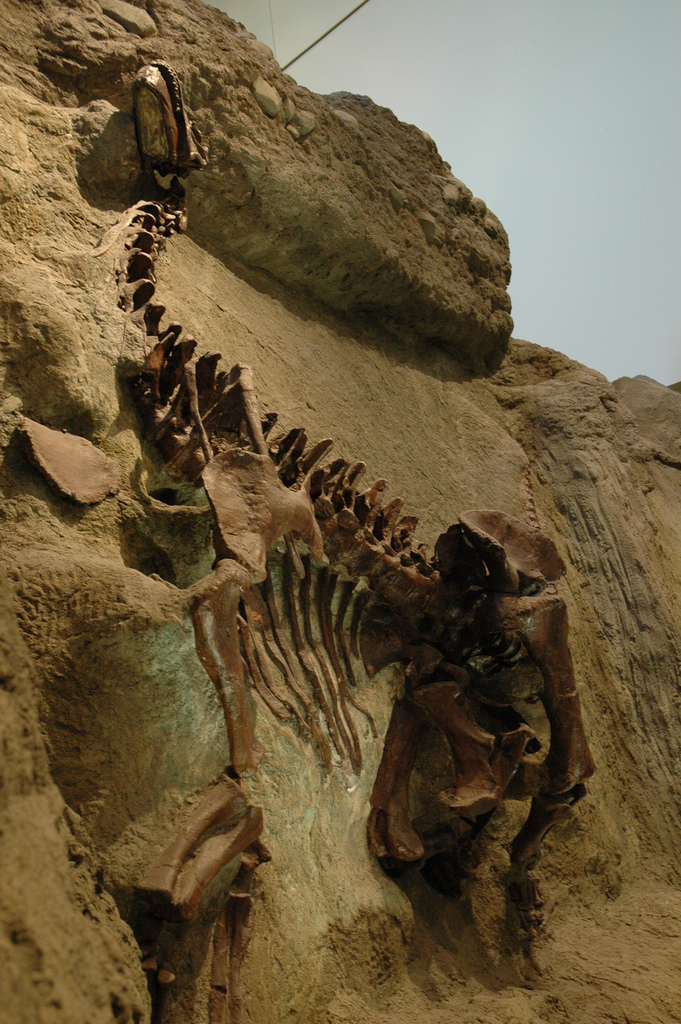 Here is a picture of the same creature from a different angle. Do you see the large rocks at his head level? Just remember, all of this sand, mud, and other material of the Morrison formation (see here for a close up of this material [src info]), this being the lower parts of that formation, must have been deposited fast and catastrophically. Otherwise it couldn’t possibly have buried this creature while he was standing up. While I have not absolutely verified that point yet, a myriad of evidences at DNM say this was an extreme and sudden catastrophe. By the way, here apparently is a sauropod that got buried while not standing.

The most common fossil found at DNM is a fresh water clam (Unio). Yes, you heard that right (“… hmmm, perhaps this dinosaur train had lobster and clams on the menu?”). These clams are usually broken and strewn about just like most of the dinosaur bones. Interestingly, “some of the loose shells are stacked, or imbricated, in a preferred west-to-east direction.” Of course, if you go west, what do you run into but the Pacific Ocean? Also of great interest is the following:

The point is, it looks like the tsunami of water, at the bottom of which were massive mud and sand flows, was forceful enough to keep some of the lighter bones afloat, while the heavier bones sunk to the bottom and were entombed. 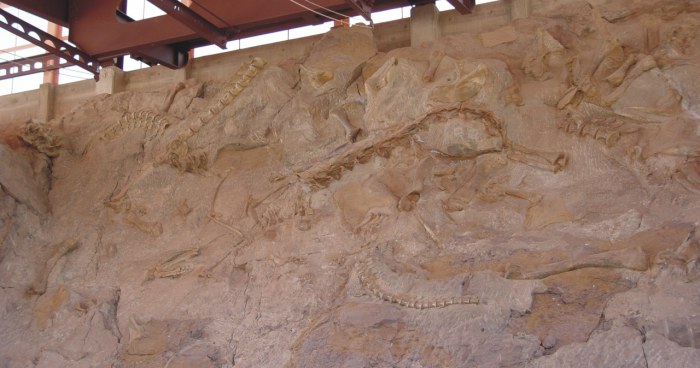 If these dinosaurs had escaped from this flood, they would have been killed by the volcanic ash and debris that fills these same formations. Austin and Hoesch talk of evidence of:

“explosive volcanism on a colossal scale [evident at DNM]…. Imagine an exploding volcano in southern California that rained half-inch diameter pumice and lapilli fragments on Utah and Colorado. That would be a most extraordinary eruption.”3

There is abudant evidence that during the flood, the few remaining creatures left had not only to deal with super-volcanoes (which make Mt. St. Helens look like a pebble compared to a boulder), but even hundred mile long fissures which opened up in the earth. These dinosaur fossils are often enmeshed in volcanic pebbles and debris (not just ash). If all of this evidence were not yet enough to make one abandon the “Dinosaur Train’s” imaginative and baseless narrative, when we do find whole skeletons, they almost always have their necks arched so far back that they touch their spine, apparently gasping for air. See Ian Juby’s terrific online picture collection of this (note: page is now obsolete).

Evolutionary story telling is not going to abate any time soon. Likewise, the Great Lizards will continue to have a central role in those stories (‘Once upon a time, long long ago, before man yet walked the earth …’). Nonetheless, what the real dinosaur finds speak of is a world-wide, catastrophic flood. The only real ‘dinosaur train’ that exists … is the one floating in the imagination of evolutionary story tellers. That’s about all the reality there is to it.