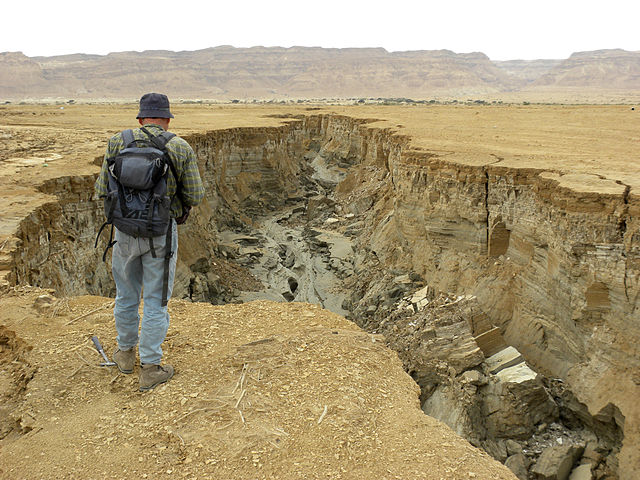 We hear it and read it daily: This or that formation is said to have formed 332 million years ago, or 3 billion years ago, or “just” 33 million years ago. Have you ever thought of “fact checking” those claims? I submit that erosion rates provide one of the ultimate fact checks in this regard. Amazingly, this exercise takes no more than some simple arithmetic to demonstrate the impossibility that the earth is multi millions (let alone billions) of years old.

Everybody agrees that the earth is constantly eroding away. Day in and day out, rain and water run-off (the main culprits) constantly wear down the surface of the earth. It’s not just the earth that water erodes: the worst culprit for destroying houses and properties in general is water run-off. A house with a bad roof or with dysfunctional gutters is in a serious danger zone of ‘going to pot,’ but that property is just as at threat if it does not properly drain the surface run-off waters (i.e. keep it out of the field, and out of the basement). Obviously, most of us have only concerned ourselves with our own little properties, not with the earth in general, but the fact is, it’s the same exact processes of erosion that constantly wear down the surface of the earth, and which transport that flux of material, of sediments, and of dirt to the sea and into drainage basins. With this context set, let’s now do some fact checking.

According to one source, the average erosion rate of all of the continents of the world is about .061 millimeters per year.1 This is small, only 6% of one millimeter. But even accepting this very small rate, some simple arithmetic reveals some astounding results. According to standard evolutionary geology, the very top of the Grand Canyon was formed some 250 million years ago. I mention the Grand Canyon only as a convenient point of reference. At the average rate of erosion of .06 millimeters per year, how much erosion would have occurred for such a surface over 250,000,000 years?

Go ahead and look at the floor you are standing on right now. Now think of going down into the deep darkness of the earth ten miles below your feet. That’s how much ground would have been eroded in ‘just’ 250 million years. Which is still just 1/20th of how old they want to make the earth. To put this in another perspective, even at the Grand Canyon’s highest point, it is some 9,000 feet (2.7 km) above sea level, meaning that the whole thing should have eroded away some five times over!
Ten miles is near double the height of Mt. Everest. So how in the world is the Colorado Plateau still there? Indeed, why haven’t the continents washed away, essential into the sea by now? As Ariel Roth states: “Using [this same rate of erosion], a number of geologists point out that North America could be leveled [i.e. into the sea] in ‘a mere 10 million years’” (ibid.).

This situation gets only worse when we look at the erosion rates of mountains, which are much greater than .06 mm a year. One estimate of the erosion rate of Mt. Everest (with an evolutionary age of 50 million years) is 2.7mm per year (which itself is a highly conservative [low] estimate according to some).2

Mt. Everest is a whopping 5.5 miles high, but has it really been completely eroded 15 times over?! And where are those 83 miles worth of disposed sediment?

This was originally published as a short “Creation Corner” article in a church bulletin.

But could uplift have compensated for the erosion?

Note that this article was originally published as a 1 page max “Creation Corner” article in March of 2010. That limitation of space didn’t allow me to address a very important objection to this case, which is that mountain uplift could have kept compensating for this continual erosion. The problem with this supposition is that everyone agrees that the marine fossils that are entombed within the top sedimentary layers of Mt. Everest were originally deposited, along with those sedimentary layers themselves, while those layers were still undersea, that is, prior to when the tectonic forces uplifted what was then the sea bottom to it’s present height. For creationists, this upheaval would have occurred rapidly at the later half of the flood event, for naturalists, it happened slowly but still surely over the last 50 million years or so. So the problem with this is as follows: Even if many other sedimentary and fossil bearing layers have already been eroded away, it still would not have taken long before all of those layers were completely eroded away. Remember, the entire mountain should have been eroded away twice over by now. But there those layers are, testifying to the fact that the mountain and those layers are still young, comparatively speaking. Those tens of millions of years didn’t erode away those top sedimentary / fossil bearing layers because they never happened.