Just as there has been glaring scientific fraud in things biological for the past century, there has been a similar fraud in things geological. The error, in a word, is uniformitarianism. This outlook assumes and asserts the earth’s past can be correctly understood purely in terms of present day processes acting at more or less present day rates. Just as materialist biologists have erroneously assumed material processes can give rise to life in all its diversity, materialist geologists have assumed the present can fully account for the earth’s past. In so doing, they have been forced to ignore and suppress abundant contrary evidence that the planet has suffered major catastrophe on a global scale.

Only in the past two decades has the silence concerning global catastrophism in the geological record begun to be broken. Only in the last 10-15 years has the reality of global mass extinction events in the record become widely known outside the paleontology community. Only in about the last 10 years have there been efforts to account for such global extinction in terms of high energy phenomena such as asteroid impacts. But the huge horizontal extent of Paleozoic and Mesozoic sedimentary formations and their internal evidence of high energy transport represents stunning testimony for global catastrophic processes far beyond anything yet considered in the geological literature. Field evidence indicates catastrophic processes were responsible for most if not all of this portion of the geological record. The proposition that present day geological processes are representative of those which produced the Paleozoic and Mesozoic formations is utter folly.

Consider the featured image above of the Grand Staircase. The Grand Staircase, of which the Grand Canyon is only a small part, is formed of many sedimentary layers that were supposedly laid down in a uniformitarian manner over more than 500 million years. The surface of this expansive cross-section is today marked by continuous erosion features, as you can see in the picture, from Bryce Canyon, to the Pink and Grey Cliffs, to Zion Canyon, to the White Cliffs, down finally to the massive erosional feature of the Grand Canyon itself. But there is a huge problem with this uniformitarian, old-earth view: Where are all of the canyons and erosional features that we would expect to find between all of those layers, if indeed millions of years passed between the time they were deposited? Take a look again at the image above, and focus on the greatly eroded, and anything but flat surface area as it stands today. If a new sedimentary layer were laid over this surface today, it would not be uniform and mostly flat(!). If it were fast forming and very thick (able to fill in canyons and gaps underneath it), the top of that new layer might be somewhat smoother, but bore holes, and more importantly the formation of new canyons (like happened with the Grand Canyon) would show that the previous surface had been an entirely and massively eroded surface before that layer was deposited. But when we visit the Grand Canyon, do we see such previous highly eroded land-surfaces, or do we mostly see flat layers one atop the next? 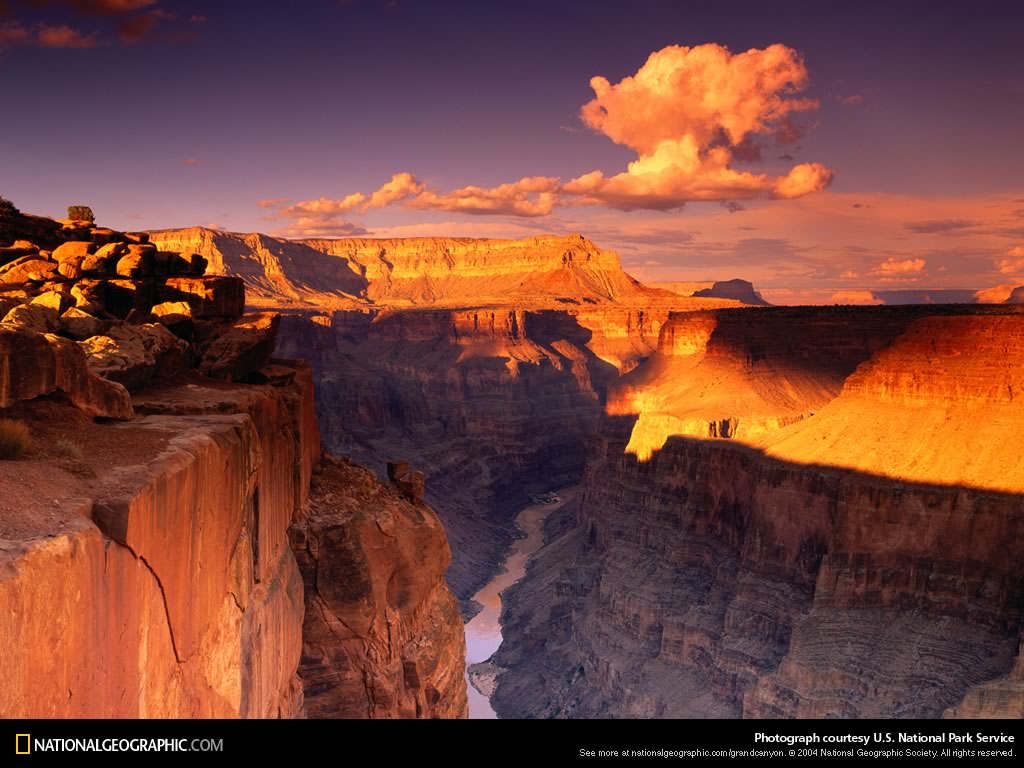 In the traditional view, for a purported half a billion years, layers were depositing mostly slowly and gradually, almost always with many millions of years separating those deposition events, and yet there is no evidence of significant, long-term erosion occurring between those layers like we see on today’s land-surface. There is no adequate answer to this conundrum in the old-earth reckoning. It’s as if erosion just started in modern times, but this is impossible! However, if these layers were laid down catastrophically, one after another, during the Flood of Noah which the Bible describes (and in fact which all ancient peoples of the earth have a tradition of — only in modern times did man get too ‘wise’ to believe this, and treat it like it was just a naive fairy tale), then the lack of major erosional features is explained very well.

Finally, much of the highly eroded land-surface today, with its canyons, cliffs, and valleys and so forth, can also be explained by the final phase of the flood. Because any global flood would have to have a deeply erosive “run-off” phase at its end, when the waters rushed back into the ocean basins. During this time the most recently laid sedimentary layers (the highest ones), would have been greatly scoured off and eroded. Though there is debate on this, some creationists believe the Grand Canyon itself was cut during this closing run-off phase of the flood. It is a deeply ironic thing that biblical flood creationists can explain the past of the earth’s surface, whereas Lyell and his old-earth, gradualist interpretation, which sought to mock and overturn flood geology with the principle of “the past is the key to the present,” is in fact the side that can’t explain the present by means of the past.

What is the alternative to this uniformitarian perspective? It is that a catastrophe, driven by processes in the earth’s interior, progressively but quickly resurfaced the planet. An event of this type has recently been documented to have occurred on the earth’s sister planet Venus.1 This startling conclusion is based on high resolution mapping performed by the Magellan spacecraft in the early 1990’s which revealed the vast majority of craters on Venus today to be in pristine condition and only 2.5% embayed by lava, while an episode of intense volcanism prior to the formation of the present craters has erased all earlier ones from the face of the planet. Since this resurfacing volcanic and tectonic activity has been minimal.

There is pervasive evidence for a similar catastrophe on our planet, driven by runaway subduction of the pre-catastrophe ocean floor into the earth’s interior.2 That such a process is theoretically possible has been at least acknowledged in the geophysics literature for almost 30 years.3 A major consequence of this sort of event is progressive flooding of the continents and rapid mass extinction of all but a few percent of the species of life. The destruction of ecological habitats began with marine environments and progressively enveloped the terrestrial environments as well.

Evidence for such intense global catastrophism is apparent throughout the Paleozoic, Mesozoic, and much of the Cenozoic portions of the geological record. Most biologists are aware of the abrupt appearance of most of the animal phyla in the lower Cambrian rocks. But most are unaware that the Precambrian-Cambrian boundary also represents a nearly global stratigraphic unconformity marked by intense catastrophism. In the Grand Canyon, as one example, the Tapeats Sandstone immediately above this boundary contains hydraulically transported boulders tens of feet in diameter.4

Radically Folded Rocks (Stratigraphic Sequences)How can solid rock bend and twist like this? At the very least, one would expect copious amounts of cracks and fracturing; more realistically, the temperature and pressure that would be generated in twisting solid rock layers like this would be expected to cause metamorphic transformation, at least at the folds. And yet none of this is observed. It is clear then that these layers were freshly laid and still wet when such unimaginably large tectonic forces contorted them to what we see. We can easily picture the Catastrophic Plate Tectonics model generating the force needed to cause such upheaval (although such formations are no less spectacular!).

That the catastrophe was global in extent is clear from the extreme horizontal extent and continuity of the continental sedimentary deposits. That there was a single large catastrophe and not many smaller ones with long gaps in between is implied by the lack of erosional channels, soil horizons, and dissolution structures at the interfaces between successive strata. The excellent exposures of the Paleozoic record in the Grand Canyon provide superb examples of this vertical continuity with little or no physical evidence of time gaps between strata. Especially significant in this regard are the contacts between the Kaibab and Toroweap Formations, the Coconino and Hermit Formations, the Hermit and Esplanade Formations, and the Supai and Redwall Formations.5

“…the lack of erosional channels [and] soil horizons … at the interfaces between successive strata…. The Grand Canyon [strata] provide superb examples of this vertical continuity with little or no physical evidence of time gaps between strata…”

Indeed, notice the knife-edge surface where the Coconino Sandstone meets the Hermit Shale in the image below from the Grand Canyon:

“With considerable interest, we note that almost 2,000 feet of sandstone, shale, and limestone (the Schnebly Hill Formation) occur between the Hermit Formation and the Coconino Sandstone, near Holbrook, in eastern Arizona [while these intermediate layers are absent at the Grand Canyon]” (Austin, Grand Canyon: Monument To Catastrophe, p. nnn).

Since uniformitarian standards necessitate a large amount of time (some 10 million years [ibid.]) to deposit the additional layers of the Schnebly Hill Formation, it puts uniformitarian geologists into the bind of having to posit that an unbelievable 10,000,000 years passed at this knife-edge surface.  But where is the evidence of 10,000,000 years of erosion here?  Uniformitarian models do not even get off the ground in explaining this formation, because they can provide no adequate source for thousands of miles of sands (see Austin, ibid., pp. 35-36).  Then, they have no adequate explanation for how such sands were deposited as extensive plains across vast distances.  Only catastrophic events of worldwide proportions can begin to accomplish such continental and even inter-continental formations.  But even disregarding these objections to the uniformitarian proposed formation of these layers, their explanations utterly fail to account for there being virtually no evidence of erosion at these surfaces.  How could this feature have sat there for 10,000,000 years without water channels forming (hills and valleys), without soil buildup, without chemical transformation of the surface, and without biological erosion taking place (burrowing bugs, worms, and plants)?

The ubiquitous presence of crossbeds in sandstones, and even limestones, in Paleozoic, Mesozoic, and even Cenozoic rocks is strong testimony for high energy water transport of these sediments. Studies of sandstones exposed in the Grand Canyon reveal crossbeds produced by high velocity water currents that generated sand waves tens of meters in height.6 The crossbedded Coconino sandstone exposed in the Grand Canyon continues across Arizona and New Mexico into Texas, Oklahoma, Colorado and Kansas. It covers more than 200,000 square miles and has an estimated volume of 10,000 cubic miles. The crossbeds dip to the south and indicate that the sand came from the north. When one looks for a possible source for this sand to the north, none is readily apparent. A very distant source seems to be required.

The scale of the water catastrophe implied by such formations boggles the mind. Yet numerical calculation demonstrate that when significant areas of the continental surface are flooded, strong water currents with velocities of tens of meters per second spontaneously arise.7 Such currents are analogous to planetary waves in the atmosphere and are driven by the earth’s rotation.

This sort of dramatic global scale catastrophism documented in the Paleozoic, Mesozoic, and much of the Cenozoic sediments implies a distinctively different interpretation of the associated fossil record. Instead of representing an evolutionary sequence, the record reveals a successive destruction of ecological habitat in a global tectonic and hydrologic catastrophe. This understanding readily explains why Darwinian intermediate types are systematically absent from the geological record — the fossil record documents a brief and intense global destruction of life and not a long evolutionary history! The types of plants and animals preserved as fossils were the forms of life that existed on the earth prior to the catastrophe. The long span of time and the intermediate forms of life that the evolutionist imagines in his mind are simply illusions. And the strong observational evidence for this catastrophe absolutely demands a radically revised time scale relative to that assumed by evolutionists.