For introductory information about this bibliography, please see the Creation Bibliography: Introduction page.

If you are looking for one quick read to cover the scientific issues, please consider the following:

What about Sandstones: Millions of years of dry deserts?

Powerful evidence shows that sandstone rock layers were formed catastrophically, and that they are in fact underwater sand-waves, not desert dunes.

What about Limestones: Millions of years of placid seas?

Extremely powerful evidence that limestones, such as the Red Wall Limestone in the Grand Canyon, were not formed by slow accumulation at the bottom of shallow seas, but rather quickly and catastrophically. Austin has discovered what may be the biggest kill event known from the fossil “record” to date. This presents hard-to-deny evidence that these layers represent monuments to a catastrophic flood event. This takes off the board one of the best supposed evidences for slow geologic eons.

Catastrophic Plate Tectonics and the Flood

Some of this model was already covered in articles above, such as in But What About the Geological / Fossil Record? featured article. A nice presentation is given here by Paul Garner on the catastrophic plate tectonics model.

The following articles are very technical, but they demonstrate that the geologic record is actually testament to an utterly upturned earth during a global catastrophe.

Age of the Earth

As you see above, radiometric dating is not the only way to “date” the earth. Even so, Uranium-lead,  carbon 14, potassium-argon, and other such radiometric dating schemes do produce results that present a significant objection to the claims of a young earth. The RATE project, sponsored by ICR and CRS, was a major research initiative to find answers to this problem. The results strongly confirmed that there must have been periods of accelerated radioactive decay (probably during creation week and the Flood) which produced the ratios we see today, from Polonium halos (radioactive halos in rocks) to fission tracks. Only periods of extremely high radioactive decay could produce such results.

Book ICR has generously made these full research results available online for free! See the RATE 2 page (representing the RATE 2 book), and the earlier RATE I page (representing the earlier RATE I book). We will be giving some of the individual chapters from these below. Major thanks goes out to the researchers who through their skill and expertise, and above all, through their dedication and incessant sacrifice, brought this evidence out to the world, for any who have ears to hear. 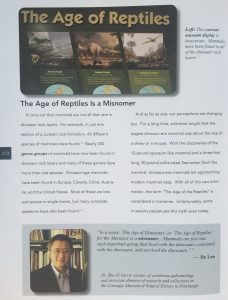 What about the fossil record? Doesn’t it represent evidence for past evolutionary eons contrary to the biblical testimony of earth history? We hear talk of “the age of reptiles” for instance, descriptions that are complete with dioramas of the “past life” of these creatures and of their unfamiliar environments. How do we square with all of these claims? To be fair, the fossil record does pose some big challenges to the biblical creationist view. One of the greatest of these is explaining the apparent order of the fossil record. Why don’t we find humans, for instance, in early rock layers, not to mention other modern creatures? Another problem is that since dinosaurs are buried sometimes almost a mile above already-laid strata, how could they have survived while those initial layers were set down catastrophically? We may not have perfect answers to all of these questions yet, but you may be surprised to hear the claim that the fossil record, far from being the bane of creationism, is in the end one of the greatest allies to the biblical (young earth) model.

Perhaps the biggest issue of all that needs cleared up is this: That the actual fossil evidence is not being fairly reported on. So that much of what is commonly known about the fossil record is inaccurate. That’s not to say it’s all just a lie, but when’s the last time you heard that T-Rexes are buried along with shark teeth? Or that most dinosaur remains are buried amidst marine (ocean!) fossils (which are often even the predominant fossil)? Such evidence is consistently being shuffled under the rug and simply left unrepresented to the public. What is more, you may be shocked to hear how many “modern” creatures were fossilized alongside dinosaurs, evidence which again is usually greatly under-reported, and usually not put on display in typical museum and media depictions.

Out of Africa, or Out of Eden and Babel?