Question 25. CPT posits that cold material from near the earth’s surface at the beginning of the Flood (essentially at surface temperature) now rests at the bottom of the mantle just above the liquid core. Why would molten material not have intruded this cold rock as it descended and warmed it as it did so? And as the cold material “pancaked” at the bottom of the mantle, would its kinetic energy been converted into substantial thermal energy?

Response: First of all, the mantle through which the cold material descends is solid, not molten. Although the surrounding mantle is solid, it nonetheless is considerably hotter and therefore weaker than the colder descending rock. So the stronger, denser sinking rock has the tendency simply to push the weaker rock out of its way as it makes its way to the bottom of the mantle. Slides 69-71 in the 2008_ICC_CPT_Talk, reproduced below, do a nice job in visualizing this sinking process and also the manner in which the sinking material deforms as it makes its way to the bottom. These slides show very little entrainment of the surrounding hot material. Neither is there any significant deformational heating, because the surrounding rock is weak.

In regard to the amount of heating resulting from the dissipation of kinetic energy as the slab interacts with the base of the mantle, even though the descent of this material is extremely fast by uniformitarian standards, in absolute terms the speed is only on the order of a meter per second (about 2.2 miles/hour) as the cold blob encounters the base of the mantle. Therefore its kinetic energy is essentially negligible as far as its being able to increase the rock temperature in any significant way. At 2 m/s, its specific kinetic energy (equal to 0.5 u2, where u is the speed) is 2 J/kg. By contrast, the specific heat for mantle rock is about 1000 J/kg-K. So the temperature increase resulting from the kinetic energy being converted to heat is only 2 J/kg/(1000 J/kg-K) = 0.002 K. 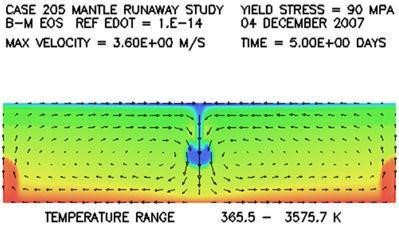