19. Question: How do vertically-acting buoyancy forces, mainly from sinking slabs of lithosphere, generating what you refer to as ‘flow in the mantle’, result in horizontal motions at the earth’s surface?

Response: Usually when I have used this wording I have had in view the numerical simulations of the supercontinent breakup that I have undertaken over the years. These calculations are initialized with a zone of cold material around much of the perimeter of the supercontinent to initialize motion within the spherical shell domain. This results in a large component of spherical harmonic degree two flow inside the domain. The 3D seismic tomography images below of the earth’s actual lower mantle density distribution that prominently displays this degree-two pattern. Blue corresponds to higher density, presumably cold, mantle rock, while red corresponds to low density, presumably hot, mantle rock.

The type of flow characterized by downwelling mostly around a great circle, to conserve mass, leads to upwellings on either side of the circle, as suggested by the red features in the images above. The presumed upwelling in the middle of the eastern hemisphere beneath Africa was near the center of the original supercontinent. If this interpretation is correct, then this upwelling flow would have had the tendency to cause the supercontinent to pull apart. Below are some snapshots from one of the computer simulations that shows the dynamics that result from the initial temperature perturbation as conservation of mass and energy is enforced and forces are balanced everywhere throughout the domain and velocity, pressure, and temperature are recomputed at each grid point time step after time step in the calculation. Although the motions are driven solely by gravity that acts in the radial direction, there are significant horizontal forces and velocities, especially near the boundaries, that naturally arise in order to conserve mass. 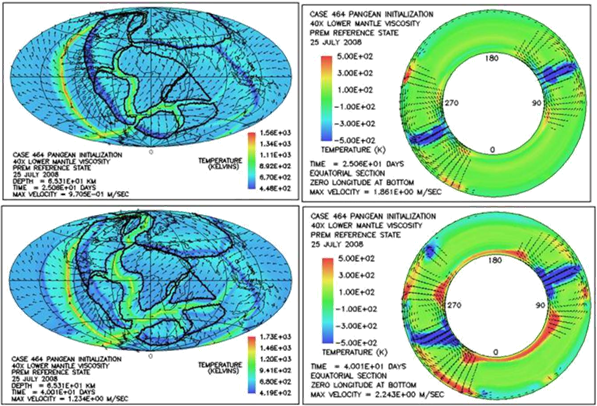 In summary, the downwelling flow around the perimeter of the continental region leads to upwelling flow beneath that region which results in an overall tendency to pull the supercontinent apart.