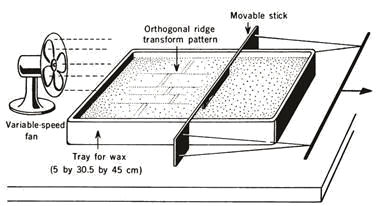 18. Question: What are the physical mechanisms responsible for the distinctive features we observe in the mid-ocean ridge system, specifically, the segmented ridge axis, the medial rift valley that is often present, and the transform faults that offset the ridge axis segments at close to 90° angles?

Response: These features are evident in the schematic diagram below. 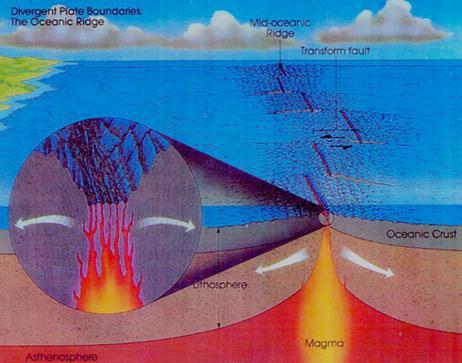 Laboratory experiments conducted now for almost 40 years have shed some extremely important light on these questions. The experiments involve the use of molten wax to investigate on a laboratory scale the mechanics of how a medium consisting of a brittle upper layer and a ductile lower layer deforms when pulled apart. The classic paper that launched this approach is by D. W. Oldenburg and J. N. Brune, “Ridge transform fault spreading pattern in molten wax,” Science 178, 301-304, 1972.

The abstract of this paper reads as follows:

A laboratory experiment shows that ridge-ridge transform faults, inactive fracture zones, and other features characteristic of spreading oceanic ridges can be produced in a variety of paraffins. Although the resultant pattern depends upon the temperature of the wax and the ratio of spreading rate to surface cooling, the characteristic orthogonal ridge transform fault system is a preferred mode of separation. Symmetric spreading occurs under conditions of no tensile strength across the ridge, and the stability of transform faults is a consequence of their lack of shear strength. The experiment also shows that properties characteristic of oceanic ridges occur under conditions of passive convection where upwelling of material at the ridge crest is a result only of hydrostatic forces in the fluid; that is, the plate separation is caused not by large convective forces beneath the ridge but rather by tensile forces in the plate.

The figure below shows the apparatus and basic results of the experiment. 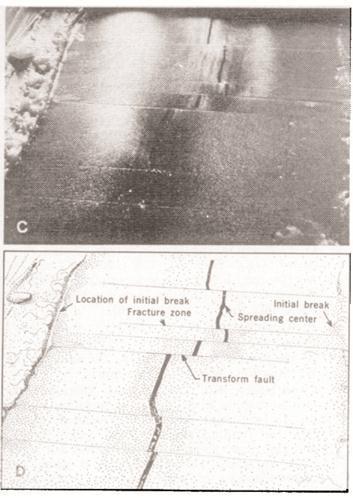 What this experiment and many similar ones since reveal is that the essential physics responsible for the segmented ridge/transform fault geometry is the presence of a strong brittle upper layer and a much weaker ductile lower layer, with surface cooling causing the brittle layer to thicken with time, yet with sufficient spreading motion to keep the divergent zone weak by replenishment with hot ductile material from below. To the extent that this experiment represents an analog to ridge tectonics on the earth, the authors conclude that “spreading ridges may be formed under the influence of tensile stresses only, and forces from an active convection cell located beneath the ridge axis are not required.” Let me here emphasize that subsequent observation strongly confirms that this generally is the case for the earth—that mid-ocean ridges are mainly the product of the divergent motion of the plates on either side and not a result of the upwelling limb of a convection cell below. In other words, the spreading ridges are largely passive features—the result of plate divergence. (This is very much contrary to many popular characterizations of plate tectonics concepts.) A second major conclusion of the authors of this paper is that “the stability of transform faults is a consequence of their lack of shear strength.”

To summarize up to this point, the picture provided in this 1972 experiment with molten wax comes close to describing the essential physics responsible for symmetric spreading at ridges and for the fracture zones that offset segments of ridge at approximately 90° angles, both within the framework of uniformitarian plate tectonics (UPT) and catastrophic plate tectonics (CPT). The very weak asthenosphere reaches almost to the surface at a spreading ridge. Partial melting of asthenospheric rock generates the basaltic magma that fills the gap as the oceanic plates diverge along the ridge axis. The circulation of sea water within this hot rock cools it rapidly and causes a strong and brittle surface layer to develop away from the ridge axis. However, the slip along the active portion of the transform faults keeps these active faults weak. Hence, there does seem to be a solid correspondence between the crucial aspects of the molten wax experiment and the mid-ocean ridge/transform fault environment.