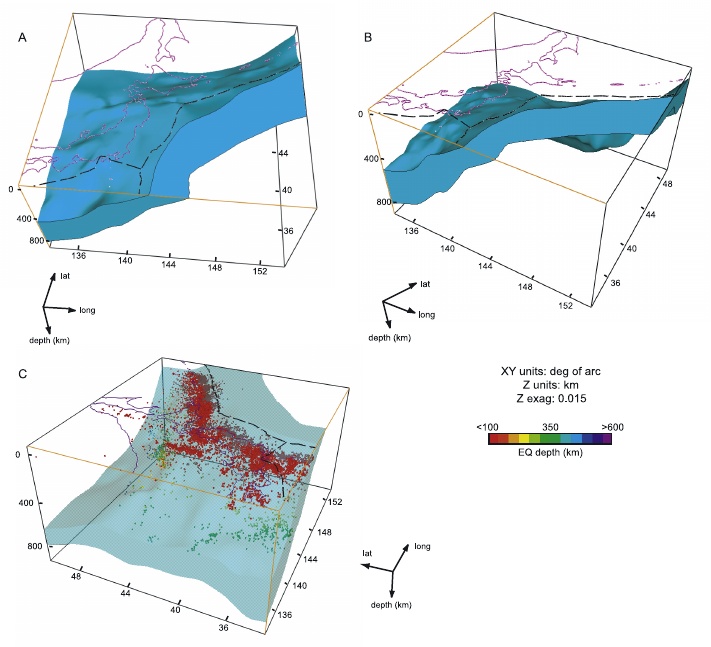 12. Question: Just how conclusively has seismic tomography demonstrated the reality of subducted plates in the mantle?

Response: The paper by K. Sigloch, N. McQuarrie, and G. Nolet, “Two-stage subduction history under North America inferred from multiple-frequency tomography,” Nature Geosciences, 1, 458-462, 2008, [link provided by ed.] mentioned above in my response to question 8 ( Q8 ), provides a dramatic example of the ability of current generation seismic tomography methods to convincingly reveal the 3D structure of subducted slabs. Figure 2 from this paper, reproduced above, shows the present shape of the Farallon Plate which, not only subducted beneath the western coast of North America since the earliest Jurassic in the past, but continues to do so as the modern Juan de Fuca Plate along the coasts of Oregon and Washington.

The paper by Miller, M.S., Gorbatov, A., Kennett, B.L.M., “Imaging changes in morphology, geometry, and physical properties of the subducting Pacific Plate along the Izu-Bonin-Mariana arc,” Earth and Planetary Science Letters 235, 331-342, 2004, shows the geometry of the portion of the Pacific Plate that is currently subducting in the Izu-Bonin Trench south of Japan. Two figures from their paper, shown below strongly suggest that the slab is in the process of tearing as it subducts.

These same authors, Miller, M.S., Kennett, B.L.N., Gorbatov, A., in another paper entitled “Morphology of the distorted subducted Pacific slab beneath the Hokkaido corner, Japan,” Physics of the Earth and Planetary Interiors 156, 1-11, 2006 [link provided by ed.], provide a 3D image, displayed below, of the subducted slab beneath Japan which gives rise to so many large earthquakes in that region.

These papers provide a sample of the work currently being done which is providing an expanding catalog of 3D seismic imaging of subducted slabs from many places around the world.